Let Us Inspire You!

With more than 20 works of nonfiction for the likes of Random House, Rodale, and Simon & Schuster under his belt, Michael Bowker is publishing his debut novel, Gods of Our Time, in February. Publishers Weekly, which previously called his work “riveting” and “compelling,” sat down to talk with Bowker about the new book—a novel he says embraces human vulnerability and need—as well as his work as a journalist investigating the Golden State Killer and his new publishing company, Sixty Degrees.

Can you tell us about the novel?

It is a book about love and relationships. Although it is set in a special city in an exotic time—Paris in the 1920s—I think the issues facing the main characters, Sophie and Jake, are similar to the ones we face today. Like most of us, they have to come to grips with their pasts before they have a chance at a future together.

How did you come up with the title?

I know Gods of Our Time is somewhat obscure, but I’ve had it in mind since the beginning. It is an ironic title. Jake is
sent to Paris to interview the great artists gathered there in 1925—Hemingway, Picasso, Fitzgerald, Faulkner, and others. Jake believes they are the “gods of his time” and will show him how to be perfect—an impression his father has left him. They turn out to be anything but gods, but perhaps the biggest things to fall from the sky for Jake were the ideals and values he felt his father held. When those plummet into the ground, Jake is left trying to figure out who he is.

Was it difficult to create a strong female character? 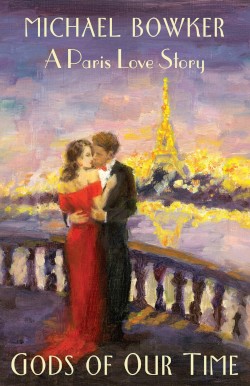 It was one of my biggest challenges, even though Sophie kind of emerged by herself. She is an artist and healer with a nurturing nature, but she is also troubled and tougher than most men when she needs to be. One of the greatest compliments I’ve received as a writer came from a former Simon & Schuster editor who said that I “created a female character most women can closely identify with.”

Your career, up to this point, has been in journalism and nonfiction.
Yes, I was one of the first journalists who covered the Golden State Killer. Law enforcement, including the FBI, hunted him for 44 years before finally arresting a suspect in April 2018. All the major networks and several cable channels have done documentaries on him since then, and most of them asked me for interviews.

Is there a criminal element in Gods of Our Time?
Yes, it takes place in underground Paris and plays a major role in the outcome of the book. Sophie and Jake are both caught up in it.

Tell us about Sixty Degrees Publishing.
It’s a relatively new publishing firm that specializes in serving writers. I own part of it because I completely support its mission—to help writers during a difficult time for authors. The company does a lot of publicity and promotion for its clients. Sixty degrees is the ambient air temperature required before butterflies can fly. I think that is symbolic of what the company does for its writers—it provides an environment that allows them to spread their wings.

Sorry, the comment form is closed at this time.